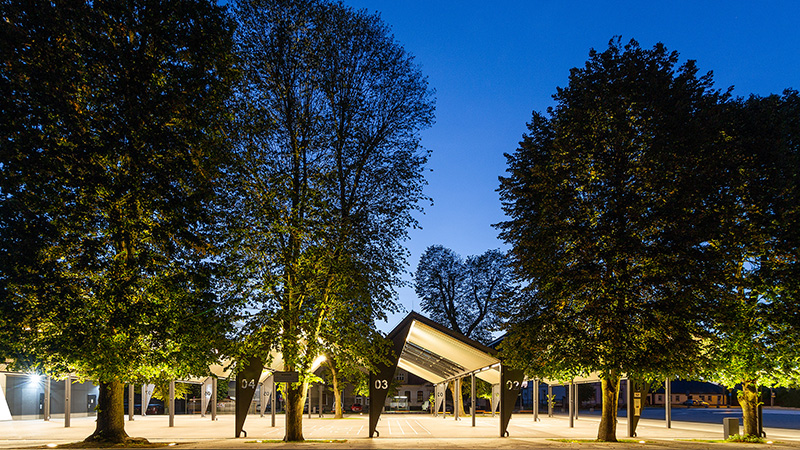 The realised market of the New Town in Wieleń is the first part of the city revitalization investment as well as the beginning of the social and spatial revitalization process, aimed at bringing about the revival of this part of the city, and in the future introducing accompanying functions in the surrounding buildings and creating attractive places for residents and visitors. The idea behind the creation of these places is the task of connecting people, ideas and mentality.
The planned layout includes: the city marketplace, the New Town square and the reconstruction of communication for the purposes of connecting with the next stage of the investment – boulevards on the Noteć River. The task of continuing the economic, social and cultural influence of the marketplace – a place for the local community – was of great importance, as this is where the community has gathered since the middle of the 17th century. The basic assumption of the project was to create a universal space with reference to the history of the city’s urban planning, encouraging people of all age groups to spend their free time there. It was also important to design a multifunctional place: recreational, commercial, walking and public activity: festivals, concerts and local cultural and historical events and to create a point connecting various points on the city map. From the point of view of the urban composition it was important to preserve and emphasize the viewing axes and pedestrian routes.
Functionally and formally the market plate was divided into three parts.
The first part – the northern part – is a large square with a smooth floor, designed as a place to strengthen local traditions by organizing cultural days or city events, such as harvest festivals and occasional concerts, for which there is a place for setting up the stage. In part of the northern square, a floor was designed with traces of the foundations of an Evangelical church burnt down in 1977.
The design assumption of the second part – the central square – was to fit the new market as best as possible into the arrangement of growing 100-year-old linden trees, which meant that no trees were cut for the project and the sick specimens that could not be saved were replaced with new plantings. The central square is a city marketplace with an asphalt floor, on which a collection of games for children and market places are marked. The object of the market is a modular steel shed on a rectangular plan with a U-shaped cut and spans finished with sheet metal in the pattern of an origami drawing. The fifth elevation has been finished with a standing seam sheet and partly made of glass on aluminum profiles as a natural illumination of the exhibition stands.
The third part – the southern square, is the space around the residential building, which historically divides the square into parts and the southern part, where the main entrance is located.